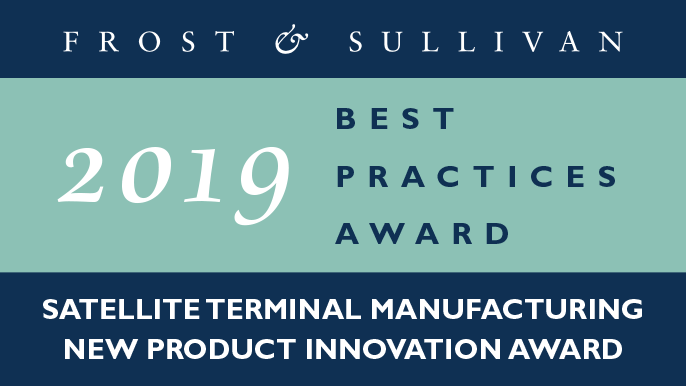 LONDON, 15 June 2019 — Isotropic Systems has received the prestigious ‘New Product Innovation Award’ from global market research and consulting company Frost & Sullivan for its work on next-generation satellite terminals that will enable ubiquitous high-bandwidth satellite connectivity for a fraction of the cost of other technologies.

Isotropic Systems was selected by Frost & Sullivan analysts in the Satellite Terminal Manufacturing category for its innovative approach to address an acute market need, its close cooperation with future customers to develop the product, and an exceptionally high right to win versus legacy phased, gimballed, and electronically scanned antennas.

Isotropic’s technology comes at a time when the satellite communications sector is at the precipice of a major growth period with new technologies such as high-throughput satellites and constellations. These new systems, which create an exponential increase in satellite capacity, require next-generation terminal solutions to achieve massive scale distribution thereby attracting new markets and customers.

For years, flat panel antennas and phased array technology have been touted as the solution. The shortcomings of these technologies, however, are increasingly obvious.

According to Frost & Sullivan’s report, “Phased array antennas and flat panel antennas share one commonality: they require an enormous amount of circuitry to create a single beam, or satellite link, in any given direction for optimal connectivity. Unfortunately, this functionality uses vast amounts of power, creates high costs, and delivers poor radio efficiency, which affects HTS connectivity to remote areas.”

Two years ago, Isotropic Systems emerged in public after four years of quiet research and development with a truly disruptive solution. The London-headquartered company, with strategic agreements with leading satellite operators such as Inmarsat and SES, builds terminal antennas based on a cutting edge field of science known as optical beam-forming.

Isotropic has recently completed active beam-forming at the sub-array level both in Ku and Ka band and plans to deliver full working terminals for testing and certification to its strategic customers in late 2021 before ramping up production.

Frost & Sullivan’s report praised Isotropic Systems for their approach to product development of building to customer specifications from the start, stating, “Instead of relying on customers approaching them with issues, Isotropic proactively engages with these operators on terminal design and to demonstrate that its terminals meet and exceed the required performance requirements.”

The award shows that Frost & Sullivan sees Isotropic Systems as a future market leader whose technology could have a wide impact on the industry, as well as the wider society.

Frost & Sullivan, the Growth Partnership Company, enables clients to accelerate growth and achieve best-in-class positions in growth, innovation and leadership. The company’s Growth Partnership Service provides the CEO and the CEO’s Growth Team with disciplined research and best practice models to drive the generation, evaluation, and implementation of powerful growth strategies. Frost & Sullivan leverages more than 50 years of experience in partnering with Global 1000 companies, emerging businesses, and the investment community from 45 offices on six continents. www.frost.com

US and NATO Forces to Benefit From Groundbreaking Satellite Technology Following Breakthrough Antenna Trials with ALL.SPACE

The ALL.SPACE Antenna: The Perfect Solution for Aero?